I can’t believe this is happening to me

I was yanked out of a deep sleep in the wee hours of this morning by an overwhelming, high-pitched tinnitus in my right ear—but this time it was so loud I could hear nothing else in the room. And I cried out in fear and frustration, because there is no cure.

The last time the otolaryngologist treated me with a second ineffective steroid injection, he was quick to say that “stress doesn’t cause” Meniere’s Disease, but it “plays a role” in an attack.

Such word play is meaningless to me, like trying to differentiate between being called “sensitive” to pets rather than strictly “allergic.”

One in a hundred thousand people, he said.

Great. I’m the lucky one.

I was in a five-year remission until my father was diagnosed with dementia last year and had to be placed in a special care home. Six months later, after I sold his home and all his possessions (against his will, but by necessity) I had an attack which still rages and last night’s new symptom left me ready to cut off my ear like Van Gogh.

If I thought it would make a difference, I would.

Meniere’s disease is a disorder of the inner ear that causes episodes in which you feel as if you’re spinning (vertigo), and you have fluctuating hearing loss with a progressive, ultimately permanent loss of hearing, ringing in the ear (tinnitus), and sometimes a feeling of fullness or pressure in your ear. In most cases, Meniere’s disease affects only one ear, in my case, the right.

I was 39 when the disease surfaced ten years ago, and I experienced much more debilitating dizziness. I had no idea what was happening to me. I thought I was dying. I was given an MRI to rule out multiple sclerosis or a brain tumour. The symptoms came and went over a five year period and then I enjoyed a five year remission.

But last June, it returned and has not left. This time, I have experienced the disease differently: severe pressure, sound distortion and tinnitus in my right ear, and only the occasional short bout with dizziness. Apparently, the more severe your dizziness, the more severe your hearing loss will be. I’ve already lost some.

There is no cure, but the first line of defense is diuretics and anti-nausea medication. Medical folk theorize that Meniere’s is caused by an improper drainage of fluid in the inner ear—hence the diuretics—but there are a range of factors that are not well understood, which explains why a water pill doesn’t work for everyone, including me, nor every time.

The more drastic treatments are reserved for those who suffer with so much vertigo that they can’t function, because each treatment carries the risk of partial or total hearing loss. Therefore I am not a candidate…yet.

I marvel at the exquisite piece of engineering our bodies are, and that this tiny little mechanism deep inside the labyrinth of my ear is the gyroscope for my body. But when it doesn’t work, it has the power to wreak havoc.

I don’t have time for this.

God, are you listening? I really hope you’re listening, because I don’t have time for this.

I am the sole advocate for my frustrated parents who grieve and lash out at the loss of their independence. My father is suffering from more than one affliction and my mother watches him helplessly while she cannot walk.

Besides that, I have financial needs. I must work. I have a family of older children who need help to find their way in the world. I have personal goals. I am writing a novel.

So I don’t have time to be driven insane by noises in my ear that turn me into a dog chasing its tail, and dizzy spells that leave me vomiting and chilly on the floor while the room spins.

Last month, when the second steroid injection failed to have any effect, the doctor gave me a shrug and offered me weak hope. “It does tend to wane.”

Since the onset of Meniere’s ten years ago, I have so much more compassion for those who experience chronic disease, because I am now one of them.

In the last year, I’ve had to walk with my parents through the most difficult phase of their lives and it has been a rocky road. They are two proud, independent people who were sucker-punched by age and illness and in many ways our relationship has been tested.

In his clear moments, Dad can’t believe this is happening to him. Through various points in this journey, I’ve been impatient, but when I go home and look in the mirror, I see my father looking back at me.

I am just as proud. I am just as frustrated by the things I can’t control. Everything stops when your body betrays you. All your plans. All your schedules. And your future becomes unclear.

The doctor said, “You need a vacation—a long one.”

I almost laughed out loud. If I had the money or the time, I would.

Oh God, I would, and I wouldn’t come back, not for a hundred years.

So I whine, “why me?” while the most positive among us say, “why not me?” And somehow,they manage to cope. I suppose I will, as well. But how do I hold on to my joy, to who I was? Is that woman gone forever?

Yes, I’m stressed. It’s like a constant heavy burden that rests on my shoulders and weighs down my body and charges through my ear. And I’m powerless to change it. The river of life carries us through rapids that are difficult to negotiate, but panicking against the current only makes us more likely to drown. 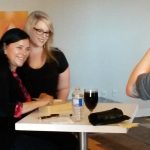 The Gabaldon Effect–God created man, but Diana created Jamie
NEED TO GET IN TOUCH?