Tips for a successful writing retreat

If you are a writer, you know that a big project can get under your skin. When it’s not going well, it becomes a niggling obsession. Even if you never develop it past the first draft, you are still driven to finish it, because writers are disciplined people. Your characters are only half-drawn. They stand naked and alone, and if you don’t dress them, no one will.

This is why I find a yearly writing retreat useful. I live with a houseful of (noisy) people, going about their lives, but even people who live alone could benefit from a break in their routine.

I usually choose a quiet place in the centre of nature—particularly beside water—with no technology (this time there was a television and a DVD player, but no cable or internet), but I think a busy city could be an excellent writing retreat too. Street noises, the smell of pizza shops, coffee, unfamiliar languages? Hmm…

This time, in four days, I wrote approximately 4,000 words on my current novel (now going on its third year and third version, but has never been finished). It might not sound like much, but I spent a lot of time plotting the end of my book, and I worked out many details that so far had eluded me. Even if I change my mind when I get there, at least I have a map to follow.

Here are a few thoughts that may help you glean the most from your next retreat:

Appreciate the moments in stimulating surroundings, wherever you choose to be. Pay attention to your five senses. I stayed at my cousin’s cottage on the Richibucto River in New Brunswick, Canada, and there is a gazebo on the property overlooking the river. I spent most of my time writing in there. The breeze blew through and I could lift my eyes to the beach, which is an ever-changing landscape. Sometimes the birds are singing and the water is like glass, disturbed by a million boats. Some days, the wind is so strong it snaps tree limbs and the river roars to life with white-capped revelry.

Don’t set too high a goal, or you’ll be disappointed. Plan on one or two achievable things that are most important to you.

A week alone is probably the maximum, even for an introvert. Perhaps you are an exception and could be alone for a much longer period, but I really miss my people by the end of five days. As long as I’ve used my time on retreat wisely, it’s usually enough to get me back on course.

Bring an alternate creative activity with you, for balance. Something you enjoy doing just for fun. For me, it’s photography and painting on canvas. I take pictures where I am and then paint the images. They’re not necessarily images I would show anyone else, but it’s a good creative warm-up.

Choose your backdrop. At home, when I write, I often listen to classical music —nothing with lyrics, because I’ll sing instead of write. But I shut it off and listened to the wind over the water this week. It raised the waves and creaked through the floating dock and bent the trees. That is powerful music.

Appreciate the moment. You’ll get more out of it. I am a goal-oriented, make-a-list kind of person, and I also tend to wish away the present—even if it’s pleasant. “I’m going to go on this retreat,” I say to myself, “and I’m going to figure out the whole last third of my book and I’m going to write 15,000 words and I’m going paint three or four paintings that might be good enough to sell.” You know what I mean. It’s all relative. This is also the reason why I’m late for things. (I am often tagged “The Late Mrs. Bulmer.”) I overestimate the amount of work I can accomplish in a day, or the time I have left before I’m expected at an event. Instead, a retreat requires me to shut off all of that and just breathe. Can I listen to my body and trust where my mind takes me?

Having said all that, there’s no magic in the place you’ve chosen to be. It’s not the music you listen to or the candles you burn. It’s not the sound of waves breaking on the shore or the loons singing in the channel at night—although that’s all very soothing.

It’s your ability to focus.

A new environment won’t generate the ideas you are desperate for or give you the power to execute them. In fact, I’ve found the absence of distraction can be a distraction.

Deliberate silence is like a spiritual fast. Because escaping distraction requires a kind of discipline or self-denial all on its own, just like fasting food is discipline for the body. You want the clarity that a retreat will bring, but the clarity is achieved with some discomfort.

Ocean breezes, hot sun and close-up glimpses of nature may improve your mood, but it doesn’t mean you’ll get any writing done. You might just as soon want to play, or sleep, or swim, or read or go for long walks. All these things feed the soul, but before you know it, the week is over.

And you had a lovely vacation. (Maybe you needed it?)

I’ve found that my inclination to procrastinate follows me everywhere I go. Just because I leave internet service and social media behind on a retreat doesn’t mean anything magical happens.

I must learn to focus.

And press through, to that state of “flow,” the absorbing place in which time suspends and the ideas and the words I need pour out one after the other. For me, it is elusive, but worth the pursuit. 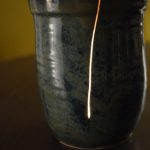 How to tell if you’re crazy
NEED TO GET IN TOUCH?